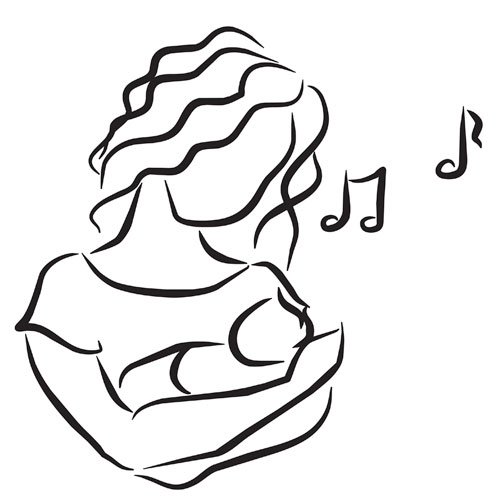 1.  Singing brings you and your baby closer

When you sing to your baby, she connects with you and your voice and you communicate your love for her. It doesn’t matter whether your voice sounds like Celine Dion or a first-round reject from Australian Idol, it is the most beautiful sound in the world to your little one. The strong bond you create will help her develop both emotionally and intellectually.

Have you seen this viral Youtube clip in which a baby cries with emotion at her mother’s singing?

It certainly brought me to tears just watching. The smiles and tears of this 10 month old really illustrate how babies respond emotionally to music – especially when the music comes directly from a parent.

2. Singing soothes your baby (and you)

Singing lullabies to your baby will calm him. I’m probably not telling you anything new here, but it’s now been proven by science. As reported in The Times of London, researchers at Great Ormond Street Hospital, Central London, found that babys’ heart rates and pain levels were lowered after being sung to.

Singing the same song to your baby over and over will familiarise your baby with that song. You can even start in pregnancy! I used to sing “The Slumber Boat” lullaby to my baby during pregnancy and after she was born I noticed that she would calm down more quickly if I sang it to her. In fact a new study conducted by scientists at the University of Helsinki  has revealed that babies who were played music while still in the womb remember the tune for up to 4 months after birth. So if you sing or hum the same melody over and over in pregnancy, it is more likely that your newborn will recognise that song. Which means that you may have greater success in calming him and sending him off to sleep just by singing or humming that special song.

What’s more singing a lullaby may also soothe you, especially at those frazzled moments when baby has been crying and things seem overwhelming (with two children under two, at one point, I certainly had a few of those moments!). According to Elizabeth MacKinlay and Felicity Baker in their article Nurturing herself, nurturing her baby: Creating positive experiences for first-time mothers through lullaby singing, “as sung texts, lullabies also serve as an outlet for emotional engagement and expression by the performer, thus serving the dual function of soothing a child while simultaneously releasing the singer’s own feelings of desire and discontent.”

Language is musical in itself – it is filled with patterns, rhythms, rhymes and intonations. Listening to you sing gets your baby ready for language. “Song is a special type of speech. Lullabies, songs and rhymes of every culture carry the ‘signature’ melodies and inflections of a mother tongue, preparing a child’s ear, voice and brain for language,” says Sally Goddard Blythe, a consultant in neuro-developmental education and director of the UK’s Institute for Neuro-Physiological Psychology in her book ‘The Genius of Natural Childhood’.

4. Singing teaches your baby new words and their meanings

Sharing rhymes and songs with your baby helps him explore and become aware of different sounds which in turn helps him understand the formation of words. Finger play, action rhymes, and simple repetitive songs teach babies to anticipate, predict, and attach words and meanings to actions. Introducing your baby to word and sound relationships plays an important role in helping him develop a strong vocabulary and the necessary skills for reading.

Recent scientific research is discovering more and more evidence that the first three years of life are optimal for brain strengthening and brain development. (For more information about baby brain development you can watch this video of an  Aspen Institute talk by Dr. Patricia Kuhl. Well worth the 58 minutes!) Children who have the right level of brain exercise in those high-impact years have foundations to build upon for future learning and success. Singing is one way to exercise your baby’s brain and adding movement to this boosts mind-body brain development.

6. Singing lets your baby know what to expect

Babies feel safe when they know what’s coming next. Singing the same song to your baby upon waking, before sleep, at nappy change time and for other routine transitions will give him  a sense of security.

This will  help him understand and remember his everyday activities, his name and objects such as nappy, bottle and lotion.

7. Singing carries on and creates traditions

Whilst singing paves the way for future learning it is also a great way of creating your own family traditions. Melodies and rhymes from our youth often evoke special memories. My mother used to sing a special Goodnight Song to my sister and I every night before we went to sleep. I now sing it to my little ones at bedtime and perhaps one day they will sing it to their children!

You can continue traditions with your own children by sharing your favourite songs from childhood or by making up a new one!

Can’t I just play a CD instead?

It’s true that playing recorded music to your baby has benefits. But the benefits are much greater when you sing  along – even out of tune! According to Blythe’s research notes published in the Guardian a baby’s brain responds differently to recorded singing than it does to live singing (particularly from a parent).

Not sure where to start?

So, now that you know the importance of singing to your baby all you need to do is learn some songs. There are hundreds of nursery rhymes, lullabies and traditional songs to choose from and you can learn plenty by joining my program of music activities for babies.

Here’s one familiar song from my program:

Mackinlay, E. and Baker, F. A. (2005) Nurturing herself, nurturing her baby: Creating positive experiences for first-time mothers through lullaby singing. Women and Music: A Journal of Gender and Culture, 9 : 69-89.

← My 7 Top Tips to get the Most out of 'Music Time' With Your Baby Happy Mother's Day - Fancy a Musical Present? 20 Coupons for Free Access to my Music for Babies up for Grabs →

Join my 8 session online program of 100+ music activities for you and bub.

If a face-to-face music class isn't practical for you or your baby/toddler, consider my online program! I'll teach you how to do music with your little one in the comfort of your own home. I sing and demonstrate the actions - you’ll soon be singing along, sharing smiles and giggles and feeling great for playing an active role in your baby’s development.

30 minutes a week = a lifetime of developmental benefits.