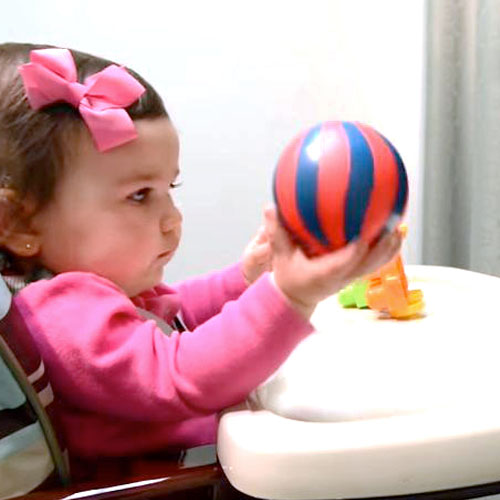 Your baby is a little scientist

If you’ve ever watched your baby encounter a new experience, you may have noticed the look on his face as he processed the fresh information and how it fits in with the core information with which he was born. Babies are constantly learning and they can do amazing things. My mother-in-law loves to tell the story about how as a baby, my husband worked out how to unlock the gate on his cot, play with his toys and then quickly get himself back in and re-lock the gate before she entered the room.

New York Times bestselling author, Dr. John Medina said in his book Brain Rules for Baby (2010) “Babies create hypotheses, test them and then relentlessly appraise their findings with the vigour of a seasoned scientist. This means that infants are extraordinarily delightful, surprisingly aggressive learners. They pick up everything.”

So perhaps the findings of a new study will not completely surprise you but they certainly confirm what has long been suspected.

A new study by researchers at John Hopkins University, has found that babies learn best when an object acts in a way that surprises them.

In a paper published in the journal Science on April 3, cognitive psychologists Aimee E. Stahl and Lisa Feigenson demonstrated for the first time, that babies will explore more, learn more and “spontaneously test relevant hypotheses about the object’s behavior” when objects behaved in surprising ways.

The duo designed four experiments for preverbal 11-month-old babies, which showed them both surprising and predictable situations regarding an object. In one scenario, for example the group of infants saw a ball roll down a ramp and appear to be stopped by a wall in its path. While another group witnessed the ball roll down the ramp and “magically”  appear to pass right through the wall.

When presented with new information about the surprising “magical” ball, the babies learned that information significantly better. Whereas, the infants who saw the predictable ball showed no evidence of learning. The researchers also found that the babies were more intrigued by the ball that had defied their expectations, compared to toys that were brand new but had not performed any curious tricks. The infants explored the “surprising” objects by banging them on the floor—as if to test their solidity—or dropping them—as if to test their weightiness.

“For young learners, the world is an incredibly complex place filled with dynamic stimuli. How do learners know what to focus on and learn more about, and what to ignore? Our research suggests that infants use what they already know about the world to form predictions. When these predictions are shown to be wrong, infants use this as a special opportunity for learning,” Professor Lisa Feigenson, said in a statement. “When babies are surprised, they learn much better, as though they are taking the occasion to try to figure something out about their world.”

5 games to surprise your baby

Of course, this doesn’t mean that you need to turn into a spectacular magician and perform incredible tricks during every playtime with your baby. But here are some ways that you can include an element of surprise in play and stimulate your baby’s learning through their different stages of development.

Source: Games to Play with Babies by Jackie Silberg

Babies aren’t born knowing how to roll over, although it may seem they are from the way they rock and squirm around on the changing table from about 3 months. You can encourage your baby to learn how to roll through the added motivation of surprise.

This Youtube video may help you with some ideas on how to play this game.

We all know that babies love playing Peekaboo. It’s a game that has captivated babies for generations and is certainly based on an element of surprise to begin with.

Very young babies under around six months are often shocked and startled at peek-a-boo. They haven’t developed object permanence so they think that not being able to see mum or dad’s face means that they’ve actually disappeared, making their sudden reappearance come as quite a surprise.

Peekaboo helps babies test and re-test a fundamental principle of existence: that things stick around even when you can’t see them.

You can help your young baby develop their understanding of object permanence by playing a gentle version of the game with a scarf (and a song!) as demonstrated in the video from my online program of activities.

This game is similar to Peekaboo and uses a scarf (preferably the silky kind).

This game turns something old into something new while encouraging your baby to figure out how to unwrap the toy.

Once your baby has developed the concept of object permanence, you can play this game which challenges him to develop reasoning skills.

Medina, J. (2010) Brain rules for baby: How to raise a smart and happy child from zero to five, Seatte, WA: Pear Press.

← Boogying With Your Baby has Brilliant Benefits for Both of You! Nature play ideas for young children →