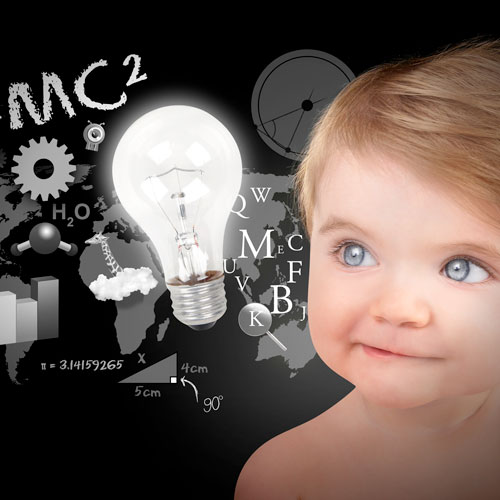 There’s much more going on inside your baby’s brain than you ever imagined possible! The new idea in brain research is that there’s a “big bang” in learning and it happens in the first 2000 days of life. What happens in those first 5 years stays with baby for life.After  learning about this idea and watching a video presentation by brain researchers at the Aspen Ideas Festival 2013, I realised that there is so much to learn about baby brain development. I wanted to know more. So I did some reading of my own and have discovered some fascinating information that every parent should be aware of. I’d love to share a few of the most interesting and important facts that I’ve found with you.

1. Babies are born to learn

Now this might sound obvious, but check out the science and amazing numbers behind this statement. A baby’s brain at birth contains trillions of neurons all waiting to be wired. Yes trillions! The weight of a newborn’s brain is about a quarter of its adult size. It grows like crazy in the first few years of life building connections between the neurons called synapses.  About 700 synapses are created per second in a baby’s brain and by the age of three, the brain has formed 1,000 trillion synapses. These synapses help the brain do everything from using a spoon to remembering the words to a song.

“A child’s experiences really come into play to determine whether those connections strengthen or are dropped or pruned,” Columbia University neurologist and paediatrician Kimberly Noble.

Environmental factors that influence the activity of a neural pathway include exposure to language, visual stimulation, diet, rest and sleep. But it is not just the quality of the experiences that shape the capacities of the brain – timing also plays a part. The Harvard University National Scientific Council on the Developing Child states that “…Different kinds of experiences are critical at different ages for optimal brian development, a concept called age-appropriate experiences. Soon after birth, basic sensory, social, and emotional experiences are essential for optimizing the architecture of low-level circuits. At later ages, more sophisticated kinds of experiences are critical for shaping higher-level circuits. (National Scientific Council on the Developing Child, 2007, p. 4)

3. A baby’s brain is built by playing tennis

Ok, not literally. But it is true that the brain is built by an interactive process known as ‘serve and return’. Your baby serves you with a sound or gesture and you return the sound or gesture. Your baby smiles and what do you do? You poke out your tongue and what does he do? And so on it goes. These simple, instinctive interactions are building the structure of your baby’s brain in what is known as brain architecture. Caring and nurturing serve and return exchanges shape a child’s learning, feelings and behaviours.

You might think that whilst your baby is having a little nap her brain is too. But the truth is, parts of your baby’s brain are more active during sleep than when awake. Research into the brain activity of baby birds (Rauske et al., 2003) has provided some insight into the importance of sleep for human babies. In the study, two groups of zebra finch chicks practised their tweeting. Afterwards, one group rested silently and the other group went to sleep. Interestingly, the brains of the resting chicks measured reduced brain activity whereas the sleeping chick’s brains showed high levels of activity indicating that they were still processing their mothers’ songs. Fascinating!

If bird brain research isn’t enough to convince you, research with humans has found that sleep consolidates knowledge in long-term memory (Fischer et al., 2007; Backhaus et al., 2008). In one study  (Hupbach et al., 2009), fifteen-month-old infants who had napped within hours of language exposure remembered the general grammatical pattern of the language 24 hours later. In contrast, infants who had not napped shortly after being familiarised with the language showed no evidence of remembering anything about the language.

So it seems that sleep time is not all about sweet dreams for baby and a bit of peace for mummy – it is actually an important time for cognitive processing which is crucial to a baby’s development. Babies know what’s good for them. Sleep, and lots of it!

5. Babies need a ‘social other’ – they don’t learn from watching screens

From the moment a baby enters the world he has an innate desire to interact with his caregivers (the people on whom he depends for basic necessities and learning) and a propensity to direct his attention towards human voices and faces, especially the eyes. Human interactions are incredibly complex and thus require the development of specialised brain mechanisms  called the ‘social brain’. Nurturing face to fact contact and stimulating verbal interactions in a social environment helps baby learn quickly about people’s behaviour and develop emotional intelligence.

This is why passively observing ‘educational’ DVD’s such as Baby Einstein really doesn’t do much for babies. In fact a 2007 study found that viewing baby DVD’s for 1 hour every day actually decreased a baby’s scores on a language development test. This report on a 2010 study could not find any evidence that baby DVD viewing improves overall language or that words featured in the programming are learned.It is also why I recommend parents use my online program of music activities for babies as an interactive teaching tool rather than just sitting him in front of the screen. When you actively say, sing and do the activities with baby, the developmental benefits are increased, and we all know screen time for our little ones should be restricted.

So now that you know a few basic facts about baby’s brain development you might like to learn some more about the latest research. Here’s a video of presentation ‘THE “BIG BANG” IN LEARNING: BRAIN CHANGES AND CHILDHOOD LEARNING’ from the Aspen Ideas Festival 2013, which inspired me to write this blog is certainly worth the 58 minute viewing time for every parent.

← World Turtle Day - Say hello to Tiny Tim in "I Had A Little Turtle" Do Re Mi (Solfège and Hand Signs) - What is it and why teach it to young children? →

Join my 8 session online program of 100+ music activities for you and bub.

If a face-to-face music class isn't practical for you or your baby/toddler, consider my online program! I'll teach you how to do music with your little one in the comfort of your own home. I sing and demonstrate the actions - you’ll soon be singing along, sharing smiles and giggles and feeling great for playing an active role in your baby’s development.

30 minutes a week = a lifetime of developmental benefits.